View of Piazza Cavour, the Palace of Justice and the Waldensian Evangelical Church 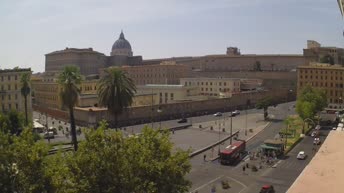 Skyline of Rome
All Webcams
DESCRIPTION

Located in the Prati district, Rome's Piazza Cavour is an elegant square home to the Palace of Justice built by Gugliemo Calderini between 1883 and 1911. The Palace of Justice, expression of late Renaissance and Baroque architecture, was entirely coated in travertine stone, today it hosts Italy’s Supreme Court of Cassation. The courtyard, created by Nicodemo Severi is a beautiful green space with tall palm trees and benches ideal for evening strolls; in the middle stands a statue, a memorial to statesman Camillo Benso, Count of Cavour, Cellarengo and Isolabella. The monument, from which the square takes its name, initiated in 1885 by artist Stefano Galletti was completed ten years later. The granite base holds the bronze statue of Cavour, formally dressed, facing the Palace of Justice. On the marble pedestal four groups of statues rise, each symbolizing the newly unified country as well as two inscriptions, one dedicated to Cavour and the second to the Municipality of Rome.

Right in front of the Palace of Justice stands one of Rome’s favorite theatres, the Politeama Adriano; initially built in wood in 1894, it was damaged in a fire several months later. The theater was finally rebuilt and inaugurated in 1898, opening with Ponchielli’s “La Gioconda”. Today the Teatro Adriano is a modern multiplex cinema!

In 2010, while work began in Rome's Piazza Cavour for the construction of an underground parking-lot, a capsule was uncovered inside the first travertine stone laid in 1883. A metallic tube was found containing gold and silver coins as well as a parchment signed by King Umberto I (unfortunately damaged by water infiltrations). The tube read: “SPQR. To Camillo Benso Count of Cavour. 1885”.