Bruges, view of the Market Square near the Belfry bell tower from the Olive Tree Restaurant

Enjoy a live view of Market Square, one of Europe's most famous plazas, with our webcam in Bruges.
Bruges is known as the “Pearl of Flanders” and holds the status of the region's most romantic city. Beautiful Gothic buildings, cobblestone alleys, stone churches and picturesque bridges have earned the city the title of UNESCO World Heritage Site! Every inch of Bruges is picture-perfect.
Thanks to our Bruges live cam, viewers can enjoy the very heart of the historical center: Market Square. Once a political and commercial quarter, today it's a pedestrian area swarming with people and tourists, animated by a colorful weekly market. The area is lined with marvellous monuments, such as the 83m Belfry Tower (or Beffroi) and the Provincial Court, while the statue of Jan Breydel and Pieter de Coninck acts as the centerpiece.

Follow live events in Market Square and travel now with our webcams in Belgium! 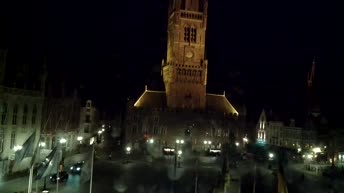 Market Square (Grote Markt) is the heart of the stunning medieval city of Bruges (Brugge), with an area of about 1 hectare it is the center of the commercial life and the ideal spot where a variety of social, political, and religious events take place.

Today the square is one of the most important must-see attractions, hundreds of tourists and locals transit here every day delighted by the fact that after the renovation works of 1995 parking was finally removed and the whole area became mostly traffic-free, a real pedestrian's dream; Market Square is dominated by the impressive medieval (1220) 83 meter high Belfry Tower (or Beffroi), one of the city's most prominent landmarks; its magnificent 47-bell carillon continues to peal out over the city every quarter hour, although thrice destroyed and rebuilt, from its top it still offers breathtaking views over the whole Bruges; declared a World Heritage site by UNESCO in 2000, this stunning city still keeps its original late medieval features so that is one of the most well-preserved medieval cities in Europe; whether we decide to explore the city simply on foot or in a horse-drawn carriage we'll be equally captured by the magical atmosphere of this so picturesque town while enjoying a charming transportation to the medieval. Its attractions also include the Cloth Hall, the imposing Provincial Palace in neo-gothic style, the statue of the patriotic heroes Jan Breydel and Pieter de Coninck also decorates the square while many shops and restaurants are surrounded by old buildings and houses. Very little information dates from the pre-roman age, anyway it seems that Bruges was founded as a fortress-city in the 9th century by Vikings who settled here (the Dutch name 'Brugge' seems to have come originally from 'Bryggja' meaning 'harbour or mooring place'); the growing prosperity of the city made it rapidly one of the most important maritime capitals of Europe until the 16th century when Bruges entered a period of stagnation. For a longtime it was at the center of the chronic struggle between England and France, this situation led to many revolts, The Bruges Matins (Brugse Metten), which saw armed insurrectionists led by de Coninck and Breydel, is absolutely worth mentioning.

Bruges, capital of West Flanders, is today a real city-museum, a charming scenery filled with incredible history, although its size, there is a lot to see and do, our tour should also include a visit to museums and ancient buildings (such as the Groeninge Museum and the gothic Palace of Gruuthuse, magnificent masterpieces of Flemish architecture) and churches, cafès and shops still working according to ancient techniques; it is assumed that the manufacturing of lace started during Ancient Rome, anyway this tradition is still strongly alive and an important resource even if the city knows other growing economic sectors, it is a world famous chocolate hotspot with a variety of chocolatiers and shops and a paradise for all lovers of beer; walking through the picturesque streets of Bruges we'll be invaded by chocolate shops, pubs and lace boutiques with all kinds of gifts, it will be furthermore interesting a visit to the Lace Museum with its permanent exhibitions showing several lace varieties, a must-see for all lovers of craftsmanship of high quality. Our tour in Bruges, also known as 'Venice of the North' due to its picturesque canals, should also include a delightful boat ride while appreciating the charming surrounding scenery including the Saint John's House Mill (Sint Janshuismolen) and the Koelewei Mill (Koeleweimolen).

Bruges has also been designated as European Capital of Culture in 2002 due to its significant cultural importance in architecture as well as painting, moreover it was well represented by the important poet and priest Guido Gezelle, the house in which he was born is today used as a literary and didactic museum.