Splendid view of the basilica in Porziuncola 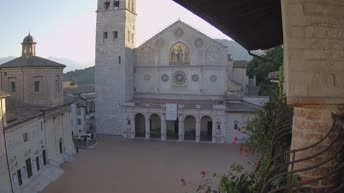 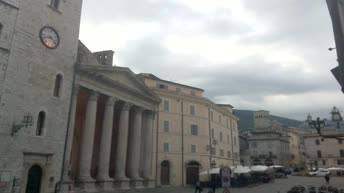 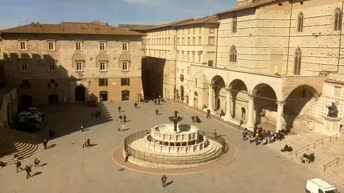 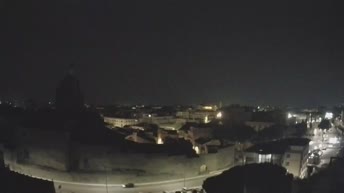 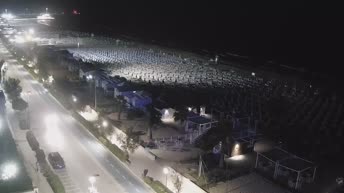 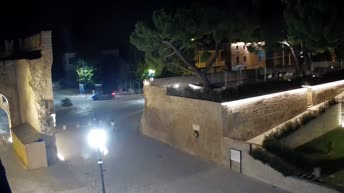 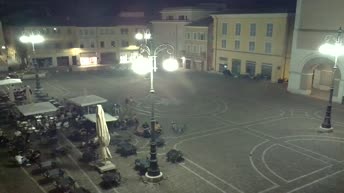 Papal Basilica of St. Mary of the Angels - Assis SkylineWebcams

Situated in the town bearing its name, only 4 kms distance from Assisi, this so small chapel is worldwide famous for being the Poverello's symbol; remained for a long time in bad conditions, it was restored by St. Francis Himself who later made it His own abode and the center of the Order of Friars Minor (Ordine dei Frati Minori) by placing it under the protection of the Virgin Mary, here He died in 1226; the ancient chapel of stone is located within the larger Basilica of St. Mary of the Angels (Basilica di Santa Maria degli Angeli) built between the 16th and 17th centuries after the designs of the architects Galeazzo Alessi, Jacopo Barozzi da Vignola and Giulio Danti by order of Pius V, the larger church was conceived to incorporate the smaller chapel of Portiuncula, that became soon completely inadequate to house the numerous pilgrims coming from all over the world and to become at the same time a popular sacred destination. Once a Holy Relic, it lost a great part of its original form due to works of different kind, however it still continues to safeguard the life and the history of the Saint of Assisi and to spread His message of peace in the world. As a sacred place the Portiuncula is also home to Indulgence of Forgiveness (also known as 'Great Pardon', 'Indulgence of Portiuncula' or 'Pardon of Assisi') implored to Pope Honorius III by the Saint after a celestial vision while He prayed for the forgiveness of sins of mankind; it was so granted to all those visiting the Church with a contrite heart and confessing sincerely their sins; from then on the Holy Door of Portiuncula is always open to mercy and forgiveness especially during the Day of Portiuncula Indulgence (il Giorno del Perdono) celebrating from noon August 1 until midnight on August 2.

The area was originally located at the feet of Assisi; after the Saint's death it has become increasingly popular in the world as sacred destination for millions of pilgrims attracted by the grace and the privilege of indulgence, so deeply spiritual as His most beloved place, each smallest detail here narrates His story and poor life spent in prayer and meditation, doubly venerated since Portiuncula is also where St. Francis received the vows of St. Clare (Santa Clara), the foundress of an order of nuns, the Order of Saint Clare, commonly referred to today as the Poor Clares (Ordine delle Clarisse).

Its interior still keeps the medieval style, austere and very simple, it includes: a semi-circular apse, a rose and white marble ceiling, the floor restored to its original appearance after the earthquake of 1997, the fresco on the façade above the entrance depicting St. Francis receiving the indulgence, fragments of frescoes on the walls, pointed arches, a wonderful polyptych behind the altar, frescoes depicting the Saint's life, the presbytery and the vault decorated by frescoes dating back to the 14th and 15th centuries; the interior of this very small church (only 4 m. x 7 m. its size) is also enriched by the masterpiece painted above the altar, an artistic example of extraordinary significance, the side door has been opened in the 19th century to allow an orderly flow of pilgrims while the external wall includes the ancient headstone of the tomb of Pietro Cattani; a very beautiful lantern in gothic style with a statue of the Virgin Mary are high-placed while outside the splendid gold-plated statue of the Madonna of the Angels (Madonna degli Angeli) by the sculptor Guglielmo Colasanti (1930) standing atop the Basilica proudly dominates the tree-lined avenue below.