View of the Basilica of Santa Maria Maggiore in Rome 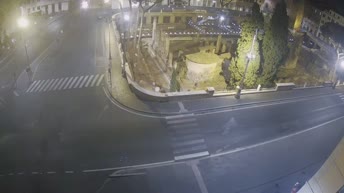 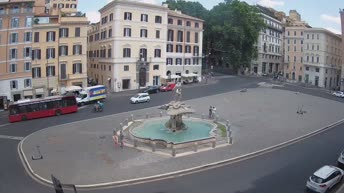 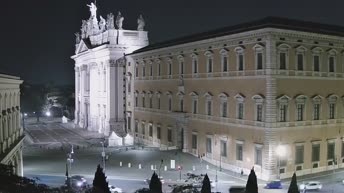 The Basilica di Santa Maria Maggiore, also known as Our Lady of the Snows, is one of Rome’s four papal major basilicas. The church rises on the Esquiline Hill, it is property of the Holy See although it does not fall within the territory of the Vatican City State.

According to the legend, the origin of the Basilica is linked to a miraculous summer snowfall! The construction of the cathedral is attributed to Pope Liberius and Roman Patrician John; John and his wife promised to donate their assets to the Virgin Mary, but anxiously awaited a clear sign indicating exactly how to proceed. In 352 the Virgin Mary appeared to Pope Liberius and John in a dream and told them that a church was to be erected in her honor in the very spot where snow would fall. On the morning of August 5th, right in the middle of a torrid Roman summer, fresh snow began to fall. In obedience to the vision of Mary the two had received that same night, Liberius marked the perimeter of the church and John financed its construction.

No traces remain of the Liberian Basilica, as this first structure was called (some believe it never actually existed). The cathedral we can admire today was built under Pope Sixtus III honoring the decision made by the Council of Ephesus in 431 AD proclaiming Mary “Mother of God”. The Basilica di Santa Maria Maggiore is also Rome’s largest Marian church, it was built on Hellenistic principles presenting a nave and two side aisles separated by 21 columns. Sixtus III also commissioned 42 beautiful panels, narrative mosaics replicating biblical scenes from the old testament positioned along the nave and across the triumphal arch.

Tune into our live cam broadcasting from Santa Maria Maggiore in Rome for a magnificent view of this stunning basilica!