Located in the north of Kefalonia, this town was once a tiny fishing village; today, it enchants tourists from all over Europe. Amphitheatrically developed around a small bay, its Venetian-style colored houses and clear sea will conquer you at first glance. Small restaurants line the harbour and offer visitors traditional Greek dishes. A walk along the beautiful promenade is a must, it starts from the marina (captured by our webcam in Kefalonia), crosses the pine forest and leads to the lighthouse; from the top, a view of Ithaca Island will sweep you off your feet!
The surrounding lush Fiscardo forest is a little piece of paradise of great ecological value. Hiking in the area is pretty popular.

Enjoy this spectacular view of Fiscardo with our live cam in Kefalonia and discover our webcams in Greece. 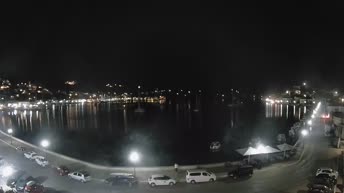 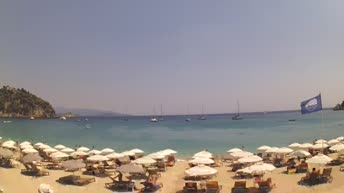 Fiscardo is the most northern village of Kefalonia. It is possible to reach Fiscardo by ferry from Lefkada of Ithaca or Astakos. Fortunately Fiscardo was not affected from the big earthquake of 1953 as the rest of the island and this is the reason why there exist a lot of houses that maintain intact the architecture tradition. Thanks to the Venetians and is t port experienced great growth. Today Fiscardo is a cosmopolitan tourist destination. In the village exist many traditional taverns and cafes.

The Fiscardo Studios is located in the center of the port of Fiscardo. It was built on 1993. Although built relatively recently, the complex is designed to match the traditional environment. The complex consists of 6 fully equipped studios,almost 30 m2 each, a café, a restaurant, a souvenir shop.